Theater Critic: “Framing My America” at the Strand Theater Company 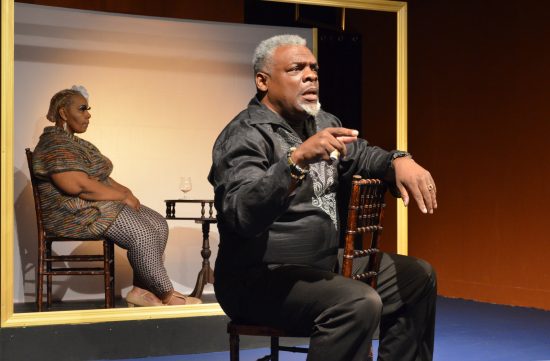 “The worst form of inequality is trying to make unequal things equal.”
– Aristotle

“Why do you want to fly, Blackbird?” You will never steal”.
– Nina Simone

A world-first chorepoem, written and directed by Tracy “Symphony” Hall, hits the Strand Theater stage this month. “Framing My America” ​​is a thought-provoking and engaging assemblage of short scenes and monologues, largely scripted but also collaboratively crafted by Hall and his castmates.

“Framing My America” ​​could easily have been titled “Framing My Baltimore”. His stories are immediate and personal, but they are universal.

Spartan décor, by designer Amy Rhodes, greets the public as they enter. It features an ingenious use of multiple frames to establish the composition. The tallest defines an elevated box behind the scenes, in which Hall spends a lot of time, sort of observant and detached at the same time. Her presence in this space has a feeling of Whistler’s Mother. The visual theme of the frames is realized from the stage, through a wonderful series of artworks exhibited by Baltimore artist, Mandela Brown. Drawn from his Shakra collections, these contemporary pieces are reminiscent of Magritte, without however sinking into pastiche. Their presence is a unifying influence on the space and helps create the perfect atmosphere for the evening’s performance.

A major star of the show is its sound design by Christen Cromwell. Its soundtrack is a nifty mishmash of golden-age television sounds and nods to figures as diverse as Gil Scott Heron and Vincent Price. It serves the whole, but sometimes stands in the foreground. Sabrina Cephas’ costumes are intriguing. In the dressing of the whole, some are minimalist and others, realistic. Hall’s looks, on the other hand, run the gamut from the Revolutionary War era to the gardenia in Billie Holiday’s hair. The lighting is from Rhodes and does a very good job in the tight space where the lack of wings and the depth of the stage preclude the use of much more than the front lighting.

“Framing My America” ​​is a short play. This is a plus, as the material explored there is sometimes intense and challenging. The structure highlights Hall as something of a leader, connecting and introducing segments that are performed by the rest of his five-member ensemble. In the first act, Hall immediately confronts, calling for “reparations right now in this space.” It is also teaching time. “Come in, class” she gestures, and the first scene begins. In it, a black student named Malcolm (Ronald K Malone) and his white teacher (Alanna Kiewe) struggle with confrontation and boundaries. This segues into a scene featuring Hall, as a pro-life protester, facing Kiewe, as an escort for an abortion clinic patient. Kiewe’s monologue here is deeply personal, drawn from the actor’s own experiences. She sticks a comical landing on “the Korean Catholic Church across the street [from the clinic] silently judging us with their candles,” and otherwise delivers a punch. Then Hall returns for a monologue, followed by another scene from Kiewe and Malone. Here, Kiewe is an Army sergeant and Malone is under arrest for robbery. The sergeant makes an offer. The accused cites Aristotle. A moral tussle ensues and a choice is inevitably made. Another direct address from Hall closes a twenty-minute first act.

The longer second act opens with an evocative movement piece built on Nina Simone’s “Blackbird.” Choreographed and performed by Kristin Michelle Young, the track is backed by vocals from Hall, who spends the rest of the evening in Billie Holiday mode. Fortunately, it stops before pure and simple usurpation. Hall’s rich, resonant vocal delivery is much closer to the sound of Sarah Vaughan. She follows Young’s dance with a beautiful “Willow Weep for Me” and then a playful story about her church-loving grandmother. Young then returns to deliver the first half of a powerful monologue about his upbringing. This section describes her origins in the “good part” of Edmonson Avenue and her early parochial studies which made her an “Oreo” in college. Billie then returns, as Hall sings “Good Morning, Heartache”. Back for the rest of his story, Young talks about re-enrolling at the Baltimore School for the Arts and Morgan State University. There is a melancholic twist and a hopeful ending to his journey. Like Kiewe’s Act 1 play, Young’s personal story served as the basis for his monologue.

A lively 20-minute material delivered by Koli Tengella closes the show. In it he covers a range of topics from the ills of Caucasian viticulture to the painful legacies of institutionalized racism. Tengella weaves between heartbreaking truth and comic relief here, questioning the existence of a higher power as thoughtfully and emotionally as he portrays the history of hip-hop. Finally, Hall closes the performance by speaking of freedom: “It is better to be locked up in a world of freedom than to be free in a world of bondage,” she asserts, leading to a James Brown callback.

“Framing My America” ​​could easily have been titled “Framing My Baltimore”. His stories are immediate and personal, but they are universal.

Duration: 77 minutes including an intermission.

“Framing My America” runs through October 30, 2022 at The Strand Theater Company, 5426 Harford Road, Baltimore, MD 21214. For more information and tickets, go online. Customers must provide proof of vaccination and are required to remain masked.