The Secret Ingredient of a Vegan Menu: Chef Training 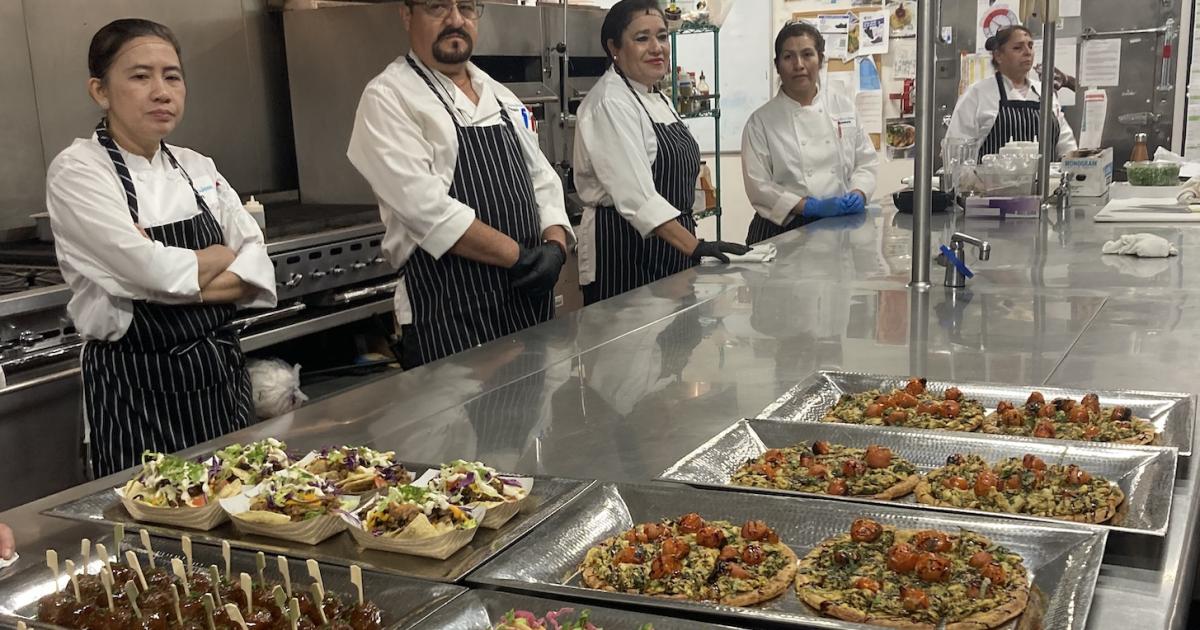 This article originally appeared as part of our Food Weekly newsletter. Subscribe to get sustainable food news delivered to your inbox every Thursday.

GreenBiz’s VERGE 22 in October at the San Jose Convention Center will be my first in-person VERGE event. But when I first visited the site last week, I entered through the loading dock. I walked through bare concrete hallways, industrial double doors, and winding hallways that all looked the same except for the odd posters describing a healthy work environment or guidelines on COVID-19 precautions. It was behind the scenes at VERGE and the convention center, not the pomp and circumstance that will greet me when I walk through the other side in a few weeks.

After navigating the hallways, I came to the large, noisy and nearly empty kitchen. The fans in the hoods above the stoves hummed like white noise machines turned up a little too much. My escort, a convention center worker, interrupted her presentations when a cart slammed past each of the grouted kitchen tiles because it was too loud to talk.

The VERGE Conference team aims to offer a plant-rich menu that is low carbon while remaining delicious and nutritious; GreenBiz Events stopped serving red meat in 2016. As a leader in connecting sustainability professionals and accelerating the transition to a clean economy, GreenBiz Events attempts to “keep up with the times.” ‘example “. According to a 2014 study from the University of Oxford, vegan diets account on average for half the carbon footprint of meat-based diets. Switching to plant-rich meals at our events is one of our tools to reduce our planetary impact.

We lead many other sustainability initiatives behind the scenes at VERGE and other GreenBiz events. They include running a waste diversion program with TerraCycle to recycle things that aren’t accepted at typical recycling centers; partnering with South Pole to purchase high-quality carbon credits to offset travel for all staff and attendees; planting trees in a wildfire scar in Siskiyou County, California with One Tree Planted and running VERGE on a 100% renewable microgrid.

On the food side, VERGE 22’s menu will include vegan and vegetarian options such as butternut squash soup, vegetarian chili, herb and goat cheese filo cups and vegan pasta primavera as well as more traditional offerings such as turmeric chicken skewers and scrambled eggs with turkey bacon. Beyond just switching to a plant-rich menu, GreenBiz is working with the Convention Center and Copia to distribute leftover food to nonprofits in San Jose. All main meals will be served on reusable plates and cutlery, while select concession items will be served in recyclable or compostable containers with help from TerraCycle.

At GreenBiz 22 in February, the menu became fully vegetarian with many vegan options. But it wasn’t easy to serve a plant-rich menu for a 1,500-person event that was satisfying, delicious and accommodated a range of dietary needs. We have found that catering teams are not always trained in plant-based cuisine and do not experience high demand for it from their other groups. Additionally, our locations have been extremely understaffed and underfunded in the wake of the pandemic, further complicating their ability to serve non-traditional menu options. As a result, the food was not up to par with what attendees had experienced at the conference in previous years.

“With the return of in-person events after GreenBiz 22, we have focused on developing a food strategy that balances sustainability and inclusivity for our attendees’ dietary needs and preferences, rather than eliminating the meat like we did for GreenBiz 22,” said Ellie Buechner, senior vice president of conferences at GreenBiz. “We also started the planning process with the Convention Center much earlier, sharing our goals with the culinary team, learning about the practices they already had in place, and planning this factory training with the staff. of the site well before the event.”

GreenBiz has also reintroduced a small proportion of poultry and fish to be more inclusive with our meals. These items are served at the end of the buffets in small portions in an effort to encourage attendees to compose plates primarily of vegetarian and vegan options as well as reduce food waste for animal protein.

Our first attempt to provide such training was in collaboration with the Physicians Committee for Responsible Medicine (PCRM), a non-profit organization that helps implement plant-based options on the menus of institutions such as as universities, prisons and hospitals.

PCRM culinary expert Dustin Harder led the training in San Jose. In a newsboy hat and with the energy of someone with a theater background (his words, not mine), he addressed the gathered group of a dozen kitchen supervisors, managers, cooks and heads of convention centers gathered before him.

“You all know how to cook,” he said. “I’m not teaching you how to cook. But it’s going to be some interesting recipes.”

Harder presented four vegan recipes during this training – mini BBQ jackfruit tacos, Impossible ground beef nachos, sweet and sour Impossible meatballs and flatbread with roasted tomatoes, spinach and artichokes – some of which will be on the VERGE menu. The goal of this training was to get chefs comfortable with vegan ingredients that they might not be using on a regular basis. Cooking plant-based isn’t just about omitting meat; there are unique techniques, ingredients, and preparations to make vegan food taste creamy, umami, and hearty.

For these recipes, that meant working with jackfruit, impossible meat products, and nutritional yeast, and using white beans, cauliflower, and carrots as base ingredients for vegan versions of sour “cream” and sauce. “with cheese” for the nachos. Harder’s goal was to show the culinary team that the foods they know how to cook can be just as easy to prepare and just as tasty using plant-based ingredients.

I didn’t know carrots could replace cheese sauce. It really made me want to cook. It’s something new.

“The mission is to plant the seed,” he told me in an interview after the training. “Report people who may not have tried [plant-based foods] at all, and have them cook and taste it, so maybe they’ll try it at home or maybe a menu item will find a permanent place on that menu.”

The cooks split into teams of two, and Harder wandered around tasting and chatting with the chefs. He corrected a team for tossing spinach and artichokes into the bean spread for roasted tomato flatbreads instead of putting them last, as they would if treated as toppings. He assured the team making the carrot and cauliflower “cheese” sauce that it didn’t taste like cheese on its own, but when combined with the rest of the nacho ingredients , it creates a similar effect.

“I didn’t know carrots could replace cheese sauce,” Tran said. “The color really caught my eye, and the recipe had the consistency of cheese sauce and it almost tasted like cheese. I was surprised that the sunflower seeds could be replaced with sour cream. really got me excited for the kitchen. It’s something new.”

The four vegan menu items with enough to feed at least 30 people were cooked, plated and ready for lunch within an hour. The speed and efficiency of the cooks was incredible, and I’m extremely jealous of their knife skills. Everyone started digging.

Nora Andrade, a kitchen supervisor, had never worked with or tasted the impossible meat products that were part of nachos and meatballs. “You can’t really feel it’s not real meat,” she said. “And you can’t even tell the difference with how it’s cooked too.”

Amazing vegan restaurants are all over the United States. The San Francisco Bay Area alone is home to dozens, including vegan sushi restaurant Shizen, which has been recognized by the Michelin Guide. These vegan options are some of the best foods you can get, with or without meat. But it takes a unique set of skills to cook vegan food — to make carrots and sunflower seeds taste rich and creamy dairy. Large-scale plant-based food – served in places such as hospitals, universities and large venues – still lags behind in quality and taste, in part because vegan training for chefs and other culinary experts is not yet mainstream.

“We never had that,” Andrade said. “Where the chef cares enough to bring someone to teach us how it’s done. And to explain the background.”

Training from experts like Harder should help ensure that plant-based foods from all types of cuisines don’t feel like a second-tier option.