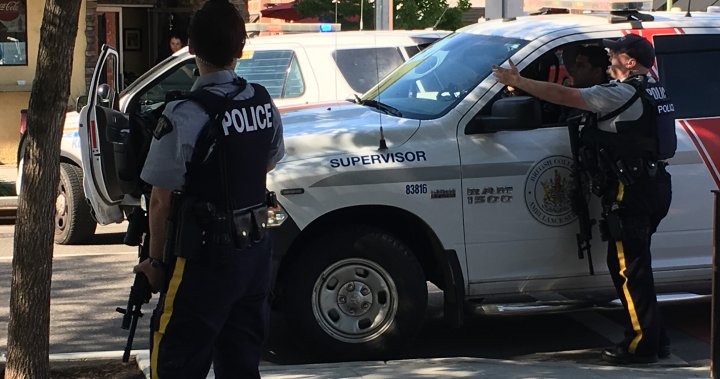 UPDATE: 8:10 p.m. – The Kelowna RCMP General Investigation Section (GIS) is investigating an armed robbery that took place in downtown Kelowna on Monday, according to a statement.

Money was stolen, but it is not known how much, and the suspects have reportedly fled east.

RCMP Cpl. Jesse O’Donaghey said that “the evidence at the scene suggests that a gun was unloaded inside the company during this cheeky daytime robbery.”

But no one was hurt, he added.

Police investigating this incident have asked nearby businesses to look at their surveillance footage and see if any of them may be of interest to police.

The RCMP have yet to comment on the heavy police presence late in the afternoon in the 300 block of Lawrence Avenue.

The story continues under the ad

Police could be seen near Chapman Park with guns drawn around 4:40 p.m. Monday and are still at the scene at 5:30 p.m.

Officers declined to comment on what they were investigating or why their guns were drawn.

A police officer and K-9 police entered the Garden of Eden at 5:30 p.m. and the owner of the escort agency was seen talking to the police.

Several officers were seen in the street with assault rifles.

At one point, no traffic was allowed inside or outside Chapman Park.

The story continues under the ad

Vehicle traffic was blocked along the block as police surrounded the neighborhood and an ambulance was waiting.

Police did not disclose information about the incident.